Are you a merchant seeking an eCommerce platform that can deliver lightning fast loading times, tons of functions and an easy to use solution so you can be setup in minutes?

If so, 3dcart and Shopify both offer excellent platforms for your needs.

However, choosing between these two eCommerce solutions requires us to dig deeper, so let’s have a look at their features in more depth in order to determine which option is the absolute best platform for your business.

While both Shopify and 3dcart offer excellent tools, they both offer different types of tools.

Additionally, one platform may excel in one department, whereas the other may excel at another area.

This makes it important for you to keep reading in order to truly find out which tool is the top option for your online store.

3dcart is a slightly-less popular eCommerce solution when compared to Shopify, but don’t let this fool you – they still offer industry-leading tools along with incredibly powerful optimizations.

One area where 3dcart excels is their speed optimizations, which allows 3dcart websites to load super fast.

Some of their websites even load in under 2 seconds, making them much faster than the industry average.

Additionally, 3dcart has very low prices, making them among the most affordable eCommerce solutions on the internet.

With great-looking themes, powerful plugins and superb customer support, 3dcart is a top alternative to Shopify and certainly worth discovering. 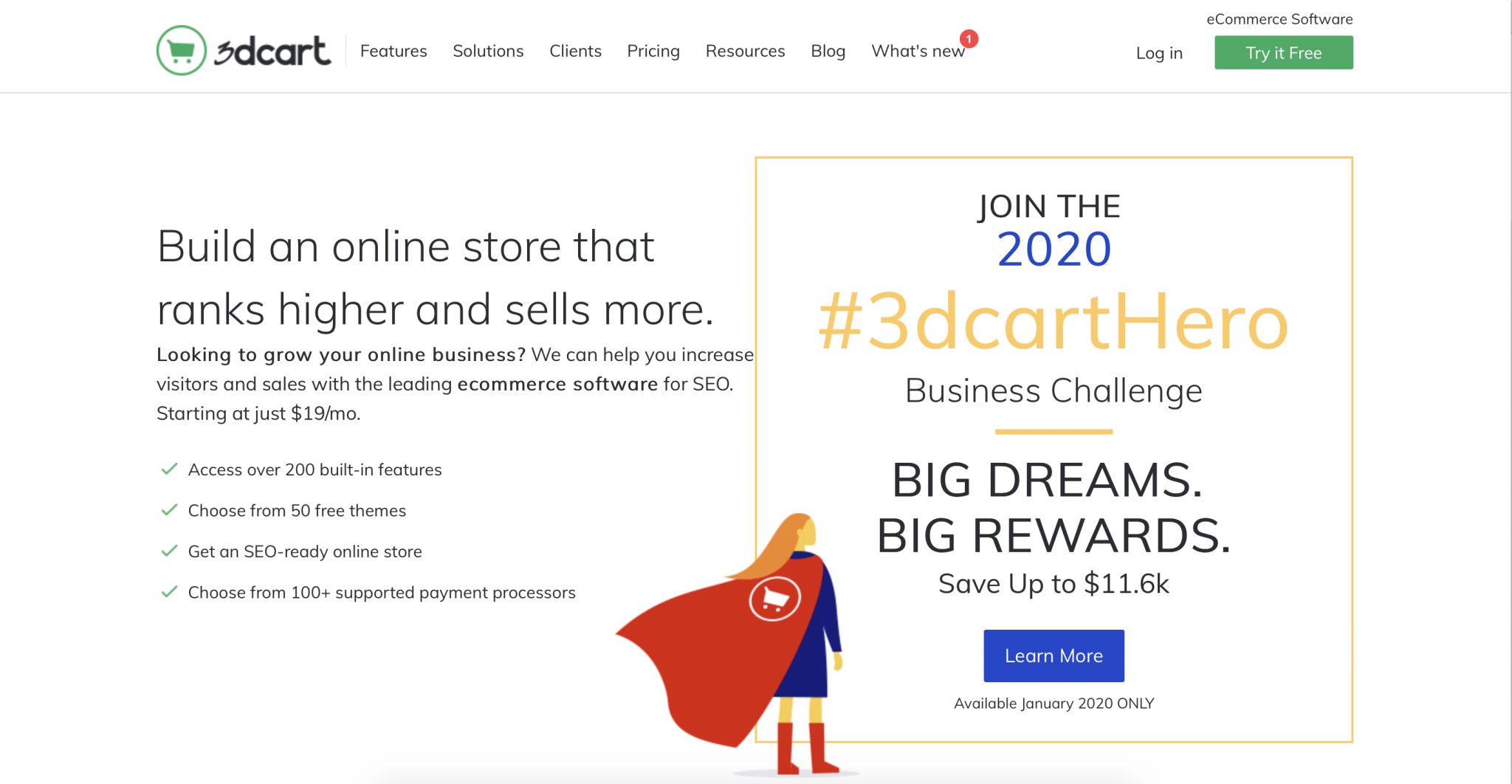 As one of the most mainstream eCommerce solutions online, Shopify is often the “go-to” platform for new merchants.

Shopify is very popular due to its ease of use and its amazingly powerful integrations such as Oberlo for dropshipping.

Shopify has a massive user base, which allows them to have a huge budget for improving their existing services and for developing new tools. For this reason, Shopify is constantly upgrading their tools and updating their services.

Additionally, Shopify provides industry-leading support so you always have their experts right around the corner.

If you need a simple platform with tons of integrations and amazing support, Shopify is a top contender.

3dcart and Shopify are among two of the excellent platforms that share similarities.

Additionally, both Shopify and 3dcart are very affordable, making them attractive to most new merchants online.

We’ve reviewed both platforms in order to compare them side by side and the results can be found below.

Keep reading this eCommerce comparison to find out which of the two is the ideal option for your business’ needs.

The first technical aspect we inspected was the uptime of both platforms.

While this may seem like a minor difference, it’s actually a pretty large difference.

Next is the frequency of incidents on both platforms. Shopify has much fewer incidents on a regular basis when compared to 3dcart, making it once again a more reliable eCommerce platform.

Finally, we looked at the loading times for websites built under both platforms.

Shopify and 3dcart both had incredibly fast loading websites, but 3dcart seems to have more performance optimizations in place.

Overall, on the technical side, Shopify comes out the winner, but both solutions have fast loading sites.

When it comes to customer support, both Shopify and 3dcart have outstanding results.

Along with having great 24/7 availabilities, you can also consult their helpful knowledge bases for more information on how to use their tools and features.

Shopify and 3dcart are both very fast at responding to inquiries, but when it comes to helpfulness, Shopify seems to have better results.

However, this is entirely dependent on the support agent who answers your questions and can vary greatly from one agent to another.

Overall, we feel like the customer support department should be a tie.

Both Shopify and 3dcart offer excellent support channels along with outstanding support agents who can handle most of your inquiries with ease.

One of the most important things to look for when choosing an eCommerce platform is the amount of built-in features.

You will definitely want to have loads of options when it comes to building and optimizing your online store.

One of the biggest reasons Shopify is a top option for merchants worldwide is due to their massive selection of third-party integrations.

While they don’t have that many built-in features, you can find just about anything you need from their apps marketplace.

This includes support channels such as live chat, email marketing tools, design optimizations, SEO optimization functions and so much more. When it comes to features, Shopify does not disappoint.

3dcart does not have nearly as many apps as Shopify but they do have a nice selection nonetheless.

Additionally, they have some pretty cool built-in tools such as email marketing built right into the main dashboard.

This means you won’t have to add any additional apps in order to create stunning email messages, newsletters and more. 3dcart also has other cool built-in tools such as the ability to create gift cards, an affiliate program and even the ability to hand out bonus points to returning customers.

Both Shopify and 3dcart are easy to install and to use.

However, Shopify is slightly easier to handle, so if you’re really afraid about having a hard time using your eCommerce platform, Shopify will make more sense to you.

Overall, they both have outstanding features that will keep you and your customers satisfied for years to come.

Both platforms are easy to use, but Shopify is the easiest of them both. It’s a tie in this department with Shopify having a slight edge due to their additional simplicity.

Designing your online store is another important aspect that you’ll need to consider.

You’ll want your online shop to look and feel professional, but this can only be attained by using high quality themes.

With Shopify, you get fewer available themes to choose from when compared to 3dcart, but the quality is much higher in general.

Shopify’s themes are also much more affordable, with an average price of about $150 per theme, whereas 3dcart’s average price is roughly $200 per theme. This slight difference can quickly get expensive if you plan on testing out a variety of different themes to see which one works the best.

Overall, when it comes to designing your website, you’ll have much better results by using Shopify.

Pricing on both platforms is pretty affordable.

You won’t find yourself spending a fortune on the monthly plans at Shopify or 3dcart.

However, one of the major downsides to choosing Shopify is that they charge you transaction fees, while most of the other eCommerce platforms no longer do so. 3dcart does not have any type of transaction fee, so if you plan to sell lots of low-priced items, 3dcart can quickly become a much more affordable option.

Another one of the downsides to choosing Shopify is their few built-in features, which leaves you needing to results to loads of third-party apps.

Many of their apps come with monthly subscription fees, which can quickly add up when you have lots of apps on your website.

Overall, 3dcart can be much more affordable, but if you don’t need many apps or if you plan on selling high-value items, Shopify isn’t too expensive either. In the end, 3dcart is more affordable.

The Final Verdict: 3dcart or Shopify

Overall, both Shopify and 3dcart are amazing eCommerce platforms that shouldn’t disappoint.

They both have their ups and downs, so it truly comes down to what you need as far as certain benefits and functions are concerned.

If you need high quality support with excellent availability, both of these eCommerce solutions deliver excellent results.

However, Shopify has the upper hand when it comes to the quality of their support agents.

As far as features are concerned, 3dcart has better built-in tools, but Shopify has a much larger selection of third-party integrations.

If you feel like the integrated functions at 3dcart are more than enough to meet your needs, you should probably avoid the extra cost of paying for apps at Shopify and simply go with 3dcart.

Both platforms also have numerous built-in optimizations for speed and performance.

This allows you to ensure that your website will be running fast and smoothly at all times. 3dcart has faster loading websites, but Shopify has fewer incidents and a much better uptime score.

Overall, it comes down to personal choice, but you can’t go wrong by choosing either one of these platforms.

Both Shopify and 3dcart are well built, simple to use and optimized to meet the needs of most merchants.